Video: White lady tracks down Ghanaian yahoo boy, gets him arrested for defrauding her of over 20,000 euros 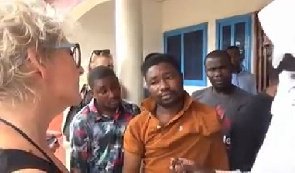 An unidentified white lady travelled all the way to Ghana to have an internet fraudster known locally as a ‘sakawa’ boy, arrested for defrauding her.
According to Adomonline, the white lady had been defrauded some years back by the suspect identified as Solomon Attah, to the tune of 20,000 euros (GHC 113,000). After which, he cut ties with her.

The lady then tracked Attah to Ghana and with the help of the local police, he was arrested.

In the video, operatives of Ghana’s Criminal Investigations Department were seen trying to gain access into the house, where Attah and some other suspected internet fraudsters were living and carrying out their activities.

Attah and his crew attempted to bolt but the police personnel were quick enough to capture them. They were arrested and taken to the police station.

While the arrest was taking place, the white man that accompained the lady demanded that Attah paid part or the full amount of money he extorted.

Attah said he’s ready to do that. There was a car parked in the compound which he could be heard saying that he’ll sell for 10,000 Euros, which covers half of the amount.

Video in link. Some English in video.

His SAKAWA voodoo na work. When will these morons learn.

Staff member
Get them some spellcasters! We know a lot of unemployed ones.

Central Scrutinizer said:
Get them some spellcasters! We know a lot of unemployed ones.
Click to expand...

Attah said he’s ready to do that. There was a car parked in the compound which he could be heard saying that he’ll sell for 10,000 Euros, which covers half of the amount.
Click to expand...

He is going to lose the car and STILL spend time in jail. Another scammer gets his just deserts.

Solomon Attah gets LOTS of free publicity, so all his family and friends can see what a low life scumbag he really is.
Na more yahoo boi swagger now eh Solomon? https://duckduckgo.com/?q=Solomon+Attah&t=ffcm&atb=v130-3&ia=web

Solomon Attah is due to make some new close friends. Reports are saying that Ghanaian prisons are up to 52% overcrowded and conditions are very bad. Something for Solomon to look forward to it seems.
Share:
Facebook Twitter Reddit Pinterest Tumblr WhatsApp Email Link
Top