3 new in Germany living shareholders, are you moving to Germany, Acklom? No more market for scams in Switzerland?
These 3 new Germans have interesting workplaces. Finances (fincor), IT, Deutsche Telekom, not sure what their interest is in a blackbox for cars?

ONE DOWN, ONE MORE TO GO.

One of the most wanted fugitives in Europe was detained in Esposende
The man of Spanish nationality was arrested on Friday in Belinho.
He had been on the run since July 2016 after being sentenced to six years in prison
for leading a criminal network that diverted more than 11 million euros to the Spanish Tax Agency.

The Spanish authorities, in collaboration with the Portuguese security forces,
detained in Portugal "one of the most wanted fugitives in Europe" responsible for a scheme
that diverted more than 11 million euros to the tax authorities, announced on Monday the police of the neighboring country .

He is a 51-year-old Galician who, for several years, led a group that started by manufacturing wooden houses,
later extending his activities to other business areas.
It set up a scheme of false invoices that had the complicity of two hundred companies, some of them of the public works sector.
José Manuel Costas Estevez issued invoices on behalf of these firms for fictitious services that his group,
Cinco Jotas, had never provided. After receiving the amounts in question,
he returned them back to the source, using open bank accounts
with more than 70 fake identities or his employees, which involved fraud in his absence.

According to the Directorate General of the Spanish National Police, |
the man was located and detained on Friday (June 22) in the vicinity of a restaurant in Belinho,
a Portuguese town in the municipality of Esposende.

"Agents of the National Police, in cooperation with the Portuguese Judicial Police and the Portuguese Republican National Guard,
arrested one of the most wanted fugitives in Europe," reads a press release sent to the newsrooms on Monday.
Costas Estévez had been missing since July 2016 after being sentenced to six years in prison for injuring the Spanish Tax Agency.
He fled days before entering jail and there were always suspicions that he might be in Portugal,
but other clues followed by the authorities were reported to have been seen in 2017 by Lake Geneva,
having coffee with England's most famous fugitive, the conman Mark Acklom.

His photo was included in December 2016 on the page "EU Most Wanted Fugitives" (the most wanted fugitives in the European Union by Europol).

According to the Spanish National Police, its location was made possible thanks to the collaboration of the ENFAST (European network of active fugitive search teams) network, which aims to achieve greater effectiveness in the tracing and detention of the largest criminals wanted at international level.

The newspaper Voz de Galicia says that the arrest of the leader of the Five Jotas will allow judging a dozen bank officials in Vigo,
who will have overlooked the schemes of the builder of wooden houses. La Caixa, Banco de Galicia,
BBVA and Banesto were the banks through which he set up this scheme, considered the largest of its kind in Galicia.

Posted by portugalpress on June 26, 2018
Spanish fraudster, “one of Europe’s most wanted”, arrested in Esposende

A convicted Spanish fraudster on-the-run, last purportedly seen having coffee by Lake Geneva in the company of Britain’s most-wanted conman Mark Acklom, has finally been run to ground in Esposende.

Authorities always believed José Manuel Costa Estévez could be in Portugal, but running him has taken almost two years.

This week’s arrest was due to collaboration between Spanish and Portuguese police using ENFAST, the European network set up to ‘improve efficiency in tracing and arresting internationally wanted criminals, who committed serious crimes’.

Vigo courts will now deal with Estévez’s extradition to Spain to serve a six-year jail term for defrauding Spanish tax authorities of €11 million in a scheme involving a number of allegedly compliant banking officials.

According to newspaper Voz de Galicia Estévez’s arrest opens the way for trials of at least 10 bankers who allegedly “overlooked” his crimes, centring on the building of wooden houses.
*What the mind can conceive and believe, it can achieve.*
"The law in the book can go byte itself in the ass. Watch it byte mine!" - Chandra Sekhar Sathyadas.

I guess Estevez was a very hands on man, building wooden houses. Raises the question were did the €11 million go to?

I would think that the CEO on the left, the cartoonfigure lookslike John Bresnahan, still hanging around the scammer John?

The 45-year-old, who had been on the run since 2012, tried to jump from a balcony before being wrestled to the ground. 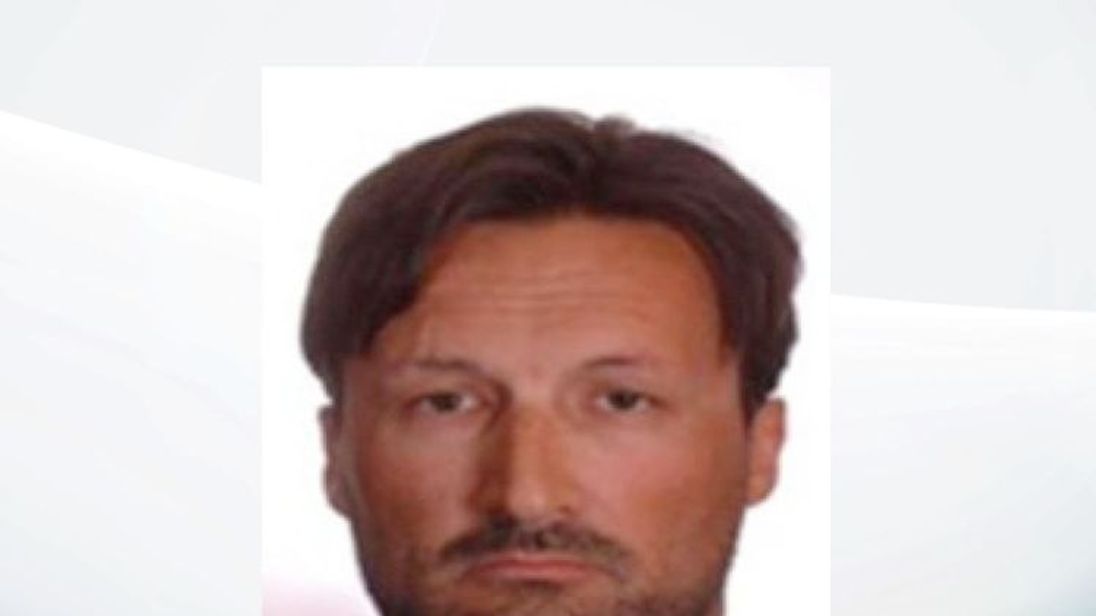 Image:Acklom was with his family when he was arrested


By Martin Brunt, crime correspondent
Britain's most wanted fraud suspect Mark Acklom has been arrested in a dramatic raid on his hideout, two years after he went on the run in Europe.
Acklom, 45, was held by police at an apartment he was sharing with his wife and their two young children in Switzerland.
Last summer, long after his name was added to the UK's Most Wanted list, Sky News broadcast a photograph of Acklom sitting with another man at a pavement cafe in Geneva, 270km (170m) from Zurich. 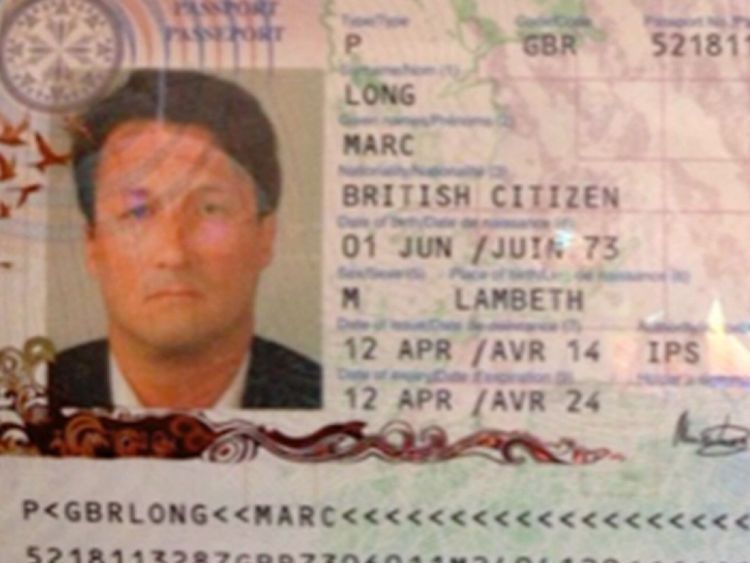 Image:Acklom changed his name to Marc Long by deed poll
In January we revealed that Acklom still had a current passport and Swiss residency permit in the name of Marc Long, one of several aliases he has used.The legitimate documents were obtained in 2014, shortly after Acklom fled Britain and after he had changed his name by deed poll.

Recently, the hunt for Acklom has focused on the Zurich area from where it's believed he has been setting up various companies in a bid to attract investors.
One business claimed to be manufacturing computer chips for black-box data recorders for cars. The company's website suggested it had customers from the luxury car industry.
At one point undercover police mounted a surveillance operation on a bank after a tip-off that Acklom was planning to meet staff and business associates there, but he did not appear.

WELL DONE to ALL involved. I hope he gets a long jail term. Many thanks to all those who spent a lot of their own time to help track down this fugitive.

Acklom will not be so cocky now.

A special treat for the two conmen who have just been arrested. Something to comfort you two on those long cold lonely nights.

*What the mind can conceive and believe, it can achieve.*
"The law in the book can go byte itself in the ass. Watch it byte mine!" - Chandra Sekhar Sathyadas.

Staff member
Patience is a virtue. Justice is not always fast but it can really cut. Europeans will probably be Argiung over who gets him first, or longest.
Silence is the scammer's best friend; knowledge is the scammer's worst enemy. 沈黙は詐欺師のよき友達、知識は詐欺師の天敵。Think globally, act globally.

"When Acklom returns to the UK he will appear in court in relation to 20 fraud offences – 12 of converting or removing criminal property and eight of fraud by false representation."
*What the mind can conceive and believe, it can achieve.*
"The law in the book can go byte itself in the ass. Watch it byte mine!" - Chandra Sekhar Sathyadas.

Staff member
Well done! I hope he serves a very long time in jail, victory for his many victims.
No trees were killed in the creation of this message. However, many scammers may be terribly inconvenienced.
Those who play games do not see as clearly as those who watch. - Old Chinese Proverb

OHHH they took of his Iwatch

It is a bit late for praying Marc. It is good to see a notorious conman in handcuffs. A small bit of comfort for those whose lives you ruined.
*What the mind can conceive and believe, it can achieve.*
"The law in the book can go byte itself in the ass. Watch it byte mine!" - Chandra Sekhar Sathyadas.

Oh wow! Acklom finally made it all the way to China.

I sincerely hope that the prosecutions and tax departments in various countries will take action against Acklom
for all the massive money laundering he has done over company accounts and
private accounts of people either consciously and willingly involved and pure victims(of identity theft).

And I also hope that those who collaborated with Acklom letting him use their accounts and covering him up,
while he was performing his scams, get punished too

Staff member
As with all these low life criminals, apart from their victims, their children suffer too & have to live with what their own parent has done for the rest of their lives. Despicable. Greed over family, unforgivable.
No trees were killed in the creation of this message. However, many scammers may be terribly inconvenienced.
Those who play games do not see as clearly as those who watch. - Old Chinese Proverb

Well Sapph, a little detail Acklom did not want to say goodbye to his daughters for them not to see him handcuffed.

Nevermind these girls were moved from country to country, house to house, school to school,
even had to packup and were driven thousands of miles in the middle of the night by James Barrie Miller from Alicante to Italy.

Or introduced by their own father as his nieces to his next romance scam victim.
What did he tell them;" oh now daddy is called uncle"?????

From the parents who changed again their names with matching stolen and fake id's this time.
What did they tell them? ; "now your surname is escolar and daddy is called manuel and he just turned 38 instead of 45".
Did the girls have fake id's too?
And can Maria Yolanda aka Maria Escollar take her daughters out of Switzerland with fake id's?

At least one was born in the UK, surely some authority in Spain, Switzerland or the UK,
must have had the common sense to have childprotection take these girls away?
Before they are packed up and moved again. Still available James Barrie Miller?
Oh no i forgot..........James Barrie Miller only helps to escape, just before an arrest!
Last edited: Jul 3, 2018

Sapphire's Strike said:
As with all these low life criminals, apart from their victims, their children suffer too & have to live with what their own parent has done for the rest of their lives. Despicable. Greed over family, unforgivable.
Click to expand...

Greed trumps everything.
WARNING: The above email is a criminal scam and all claims made within the above email(s) are 100% fictional lies fabricated by an internet scammer. The scammer operates using a fake/false name and identity with the sole intention of defrauding people. If you respond to this scammer's email(s) you will lose your money.
Share:
Facebook Twitter Reddit Pinterest Tumblr WhatsApp Email Link
Top